Mould, Moisture and Your Home

The key to mould control is moisture control.
If mould is a problem in your home, you should clean up the mould promptly and fix the water problem.
It is important to dry water-damaged areas and items within 24 to 48 hours to prevent mould growth.

Why is mould growing in my home? 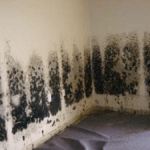 Moulds are part of the natural environment. Outdoors, moulds play a part in nature by breaking down dead organic matter, such as fallen leaves and dead trees. Indoors, mould growth should be avoided. Moulds reproduce by means of tiny spores; the spores are invisible to the naked eye and float through outdoor and indoor air. Mould can begin growing indoors when mould spores land on surfaces that are wet. There are many types of mould, and none of them will grow without water or moisture.

Can mould cause health problems?

Moulds are usually not a problem indoors, unless mould spores land on a wet or damp spot and begin growing, Moulds have the potential to cause health problems. Moulds produce allergens (substances that can cause allergic reactions), irritants and, in some cases, potentially toxic substances (mycotoxins). Inhaling or touching mould or mould spores may cause allergic reactions in sensitive individuals.

Allergic responses include hay fever-type symptoms, such as sneezing, runny nose, red eyes, and skin rash (dermatitis). Allergic reactions to mould are common. They can be immediate or delayed. Moulds can also cause asthma attacks in people with asthma who are allergic to mould. In addition, mould exposure can irritate the eyes, skin, nose, throat and lungs of both mould-allergic and non-allergic people. Symptoms other than the allergic and irritant types are not commonly reported as a result of inhaling mould.

Research on mould and health effects is ongoing. This article provides a brief overview; it does not describe all potential health effects related to mould exposure. For more detailed information, consult a health professional. You may also wish to consult your state or local health department.

How do I get rid of mould?

It is impossible to get rid of all mould and mould spores indoors. Some mould spores will be found floating through the air and in house dust. Mould spores will not grow if moisture is not present. Indoor mould growth can and should be prevented or controlled by controlling moisture indoors. If there is mould growth in your home, you must clean up the mould and fix the water problem. If you clean up the mould but don’t fix the water problem, then, most likely, the mould problem will recur.

Who should do the cleanup?

This depends on a number of factors. One consideration is the size of the mould problem. Where mouldy area is less than about 10 square feet (less than roughly a 3-foot by 3-foot patch), in most cases, you can handle the job yourself, following the guidelines below.

Should there be a lot of water damage, and/or mould growth covers more than 10 square feet, consult with a Mould inspector.
If you choose to hire a contractor (or other professional service provider) to do the cleanup, make sure the contractor has experience cleaning up mould. Check references and ask the contractor to follow the recommendations of the EPA, or other guidelines from professional or government organizations.

Do not run the HVAC system if you know or suspect that it is contaminated with mould. This could spread mould throughout the building.
If the water and/or mould damage was caused by sewage or other contaminated water, then call in a professional who has experience cleaning and fixing buildings damaged by contaminated water.
If you have health concerns, consult a health professional before starting cleanup.

The tips and techniques presented in this section will help you clean up your mould problem. Professional cleaners or re-mediators may use methods not covered here. Please note that mould may cause staining and cosmetic damage. It may not be possible to clean an item so that its original appearance is restored.

Fix plumbing leaks and other water problems as soon as possible. Dry all items completely.
Scrub mould off hard surfaces with detergent and water, and dry completely.

Absorbent or porous materials, such as ceiling tiles and carpet, may have to be thrown away if they become mouldy. Mould can grow on or fill in the empty spaces and crevices of porous materials, so the mould may be difficult or impossible to remove completely.
Avoid exposing yourself or others to mould.
Do not paint or caulk mouldy surfaces.

Clean up the mould and dry the surfaces before painting. Paint applied over mouldy surfaces is likely to peel. If you are unsure about how to clean an item, or if the item is expensive or of sentimental value, you may wish to consult a specialist.

Specialists in furniture repair and restoration, painting and art restoration and conservation, carpet and rug cleaning, water damage, and fire or water restoration are commonly listed in phone books. Be sure to ask for and check references. Look for specialists who are affiliated with professional organizations.

What to Wear When Cleaning Mouldy Areas:

Avoid breathing in mould or mould spores. In order to limit your exposure to airborne mould, you may want to wear an N-95 respirator, available at many hardware stores and from companies that advertise on the Internet. (They cost about $12 to $25.) Some N-95 respirators resemble a paper dust mask with a nozzle on the front, and others are made primarily of plastic or rubber and have removable cartridges that trap and prevent most of the mould spores from entering.

In order to be effective, the respirator or mask must fit properly, so carefully follow the instructions supplied with the respirator. Please note that the Occupational Safety requires that respirators fit properly (via fit testing) when used in an occupational setting.
Wear gloves. Long gloves that extend to the middle of the forearm are recommended. When working with water and a mild detergent, ordinary household rubber gloves may be used.

If you are using a disinfectant, a biocide such as chlorine bleach, or a strong cleaning solution, you should select gloves made from natural rubber, neoprene, nitrile, polyurethane or PVC. Avoid touching mould or mouldy items with your bare hands.
Wear goggles. Goggles that do not have ventilation holes are recommended. Avoid getting mould or mould spores in your eyes.

How do I know when the remediation or cleanup is finished?

You must have completely fixed the water or moisture problem before the cleanup or remediation can be considered finished, based on the following guidelines:

You should have completed the mould removal. Visible mould and mouldy odours should not be present. Please note that mould may cause staining and cosmetic damage.
You should have revisited the site(s) shortly after cleanup, and it should show no signs of water damage or mould growth.
People should have been able to occupy or re-occupy the area without health complaints or physical symptoms.
Ultimately, this is a judgment call; there is no easy answer.

Moisture control is the key to mould control, so when water leaks or spills occur indoors, ACT QUICKLY. If wet or damp materials or areas are dried within 24 to 48 hours after a leak or spill happens, in most cases, mould will not grow.
Clean and repair roof gutters regularly.

Make sure the ground slopes away from the building’s foundation so that water does not enter or collect around the foundation.
Keep air-conditioning drip pans clean and the drain lines unobstructed and flowing properly.

If you see condensation or moisture collecting on windows, walls or pipes, ACT QUICKLY to dry the wet surface and reduce the moisture/water source. Condensation can be a sign of high humidity.

Actions that will help to reduce humidity:

Vent appliances that produce moisture, such as clothes dryers, stoves, and kerosene heaters, to the outdoors, where possible. (Combustion appliances, such as stoves and kerosene heaters, produce water vapour and will increase the humidity unless vented to the outside.)
Use air conditioners and/or de-humidifiers when needed.
Run the bathroom fan or open the window when showering. Use exhaust fans or open windows whenever cooking, running the dishwasher or dish washing, etc.

Actions that will help prevent condensation:

Reduce the humidity (see above).
Increase ventilation and air movement by opening doors and/or windows, when practical. Use fans as needed.
Cover cold surfaces, such as cold water pipes, with insulation.
Increase air temperature.

Testing or Sampling for Mould

Is sampling for mould needed? In most cases, if visible mould growth is present, sampling is unnecessary. Since no EPA or other federal limits have been set for mould or mould spores, sampling cannot be used to check a building’s compliance with federal mould standards. Surface sampling may be useful to determine if an area has been adequately cleaned or re-mediated.

Sampling for mould should be conducted by professionals who have specific experience in designing mould sampling protocols, sampling methods, and interpreting results. .

You may suspect hidden mould if a building smells mouldy but you cannot see the source, or if you know there has been water damage and residents are reporting health problems. Mould may be hidden in places such as the backside of dry wall, wallpaper or panelling, the top-side of ceiling tiles, or the underside of carpets and pads, etc.

Other possible locations of hidden mould include areas inside walls around pipes (with leaking or condensing pipes), the surface of walls behind furniture (where condensation forms), inside duct work, and in roof materials above ceiling tiles (due to roof leaks or insufficient insulation).

Investigating hidden mould problems may be difficult and will require caution when the investigation involves disturbing potential sites of mould growth. For example, removal of wallpaper can lead to a massive release of spores if there is mould growing on the underside of the paper. If you believe that you may have a hidden mould problem, consider hiring an experienced professional.

Biocides are substances that can destroy living organisms. The use of a chemical or biocide that kills organisms such as mould (chlorine bleach, for example) is not recommended as a routine practice during mould cleanup. There may be instances, however, when professional judgment may indicate its use (for example, when immune-compromised individuals are present).

In most cases, it is not possible or desirable to sterilize an area; a background level of mould spores will remain, and these spores will not grow if the moisture problem has been resolved. If you choose to use disinfectants or biocides, always ventilate the area and exhaust the air to the outdoors. Never mix chlorine bleach with other cleaning solutions or detergents that contain ammonia because toxic fumes could be produced.

Please note: Dead mould may still cause allergic reactions in some people, so it is not enough to simply kill the mould; it must also be removed.

Ten Things You Should Know About Mould

2. There is no practical way to eliminate all mould and mould spores in the indoor environment; the way to control indoor mould growth is to control moisture.

3. If mould is a problem in your home, you must clean up the mould and eliminate sources of moisture.

4. Fix the source of the water problem or leak to prevent growth.

a. venting bathrooms, dryers, and other moisture-generating sources to the outside;
b. using air conditioners and de-humidifiers;
c. increasing ventilation; and
d. using exhaust fans whenever cooking, dish washing, and cleaning.

6. Clean and dry any damp or wet building materials and furnishings within 24 to 48 hours to prevent growth.

7. Clean off hard surfaces with water and detergent, and dry completely. Absorbent materials that are mouldy (such as carpeting and ceiling tiles) may need to be replaced.

9. In areas where there is a perpetual moisture problem, do not install carpeting.

10. Moulds can be found almost anywhere; they can grow on virtually any substance, provided moisture is present. There are moulds that can grow on wood, paper, carpet, and foods